The open days The UPV responds to the València Ciudad Neutra Mission is held on October 7 and 8 at the Universitat Politècnica de València, organized by the alliance of 12 UPV Chairs for the ecological transition, among which are the Chair of New Green Transition at the UPV and the Vice-Rectorate for Sustainable Development of the campuses. These conferences revolved around the role of the UPV, as the ambassador of the València Missions, for the decarbonization of the city within the framework of the first Mission launched by the València City Council: València Ciudad Neutra #ValènciaCiutatNeutra 2030. The conferences were inaugurated by the mayor, Joan Ribó, and the rector of the UPV, José I. Capilla, who have highlighted the importance of the UPV-city alliance that mobilizes the knowledge of the university’s teaching staff and students to achieve the objective of decarbonizing the city through 1 just energy transition. His speeches and those of Débora Domingo, Vice-Rector for Sustainable Development of the campuses, and Salvador Coll, Vice-Rector for Innovation and Transfer, demonstrated the will and political commitment of the UPV to decarbonize the three UPV campuses and work together with the City Council for the energy transition of the city. 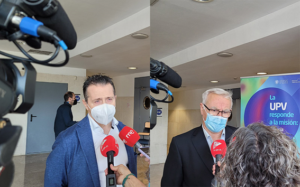 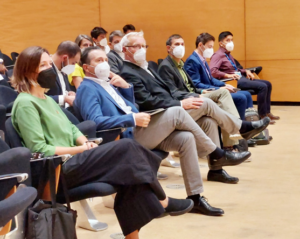 On the second day of the Conference, focused on the decarbonization of the UPV campuses, the team of the Chair of New Green Transition at the UPV was in charge of coordinating the workshop Co-designing a climate living lab at the UPV, an activity of special relevance since the creation of this Living Lab is one of the institutional commitments of the university to initiate this energetic transition. The director of the Chair, Dionisio Ortiz, was in charge of conceptually introducing the Living Labs and their relevance in the UPV ecosystem. The mapping of ecological transition initiatives at the UPV was also presented, which was coordinated by the Chair’s team last June and was a first experience in the exploration of actors and initiatives.

Then an online connection with Andy van den Dobbelsteen, Sustainability Coordinator at TU Delft (Netherlands), @tudelft, brought us first hand to the experience of creating a Living Lab and developing the climate strategy of the his university, materialized in the Green Village campus and many other projects. 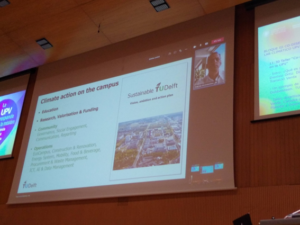 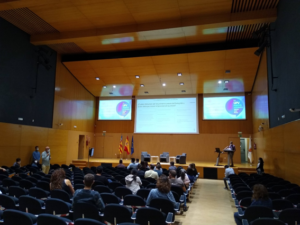 After the intervention of TU Delft, the team of the Chair, together with the Chair Planet and Sustainable Development, organized a participatory dynamic among all the attendees of the workshop who worked in groups to propose, through the use from an online platform, answers to three questions about what the goals, actors and forms of governance should be, key questions to start designing a Climate Living Lab at the UPV.

Finally, a short summary of the answers was given and a debate took place on how this process of creating a Living Lab should begin, in which all the actors in the university ecosystem participate and have a voice. , emphasizing the importance and urgency of starting it as soon as possible. In this task the government of the UPV, and in particular the Office of the Vice President for Sustainable Development of the campuses, has a key role to play and has promised to support its creation in the coming months. Also important is the role that the alliance of the 12 chairs of the UPV will play for the ecological transition in this climatic Living Lab.