On October 27 and 28, 2022, the Polytechnic University of Valencia hosted the open days The UPV-city alliance for the València 2030 Climate Mission. The sessions were co- organized by the UPV Urban Energy Transition Chair and the Vice-rectorate of
Sustainable Development of Campuses. The background of the days were the binomials university-city that the seven Spanish cities participating in the European Mission of Cities towards climate neutrality, including Valencia.

On the second day, two conferences on campus decarbonization took place universities and strategic university-city alliances in Europe, with Andy van den Dobbelsteen, Sustainability Coordinator at TU Delft (The Netherlands) and Per Lundqvist, Vice-rector for Sustainability at the Royal Institute of Technology in Stockholm (Sweden). The most recent advances in the binomials UPV-València and UV- València for the València 2030 Climate Mission, as well as the actions that are being carried out the UPV and the UV in the respective university-city binomials. 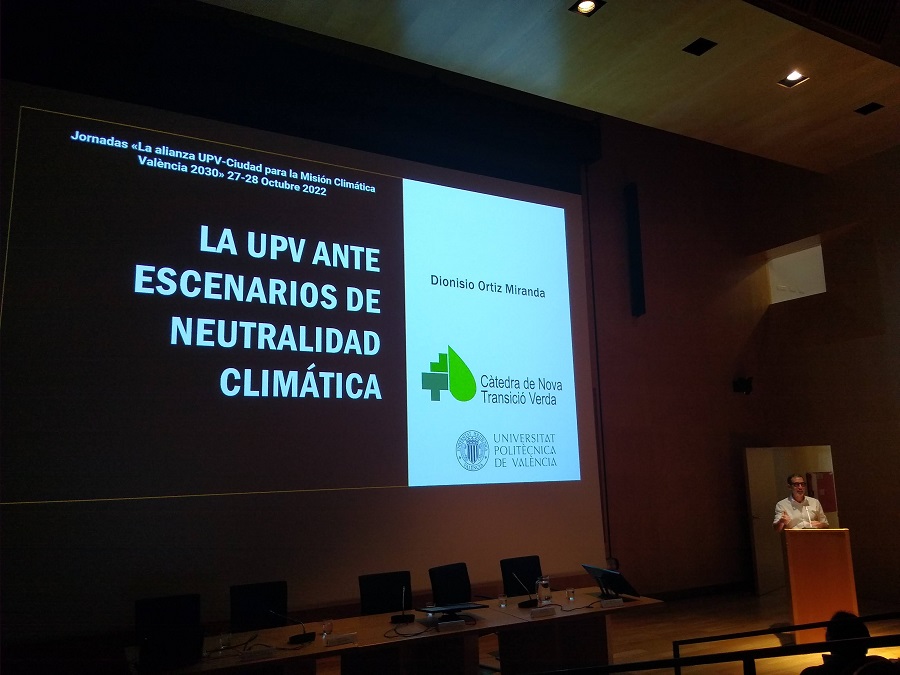 On the part of the UPV, the advances made in the UPV Living Lab since its inception were presented. Launched in October of last year. Dionisio Ortiz, director of the Chair of New Green Transition at the UPV, took part in this second day presenting the four scenarios of climate neutrality at the UPV, results of the Foresight Workshop “The UPV in scenarios of climate neutrality”, organized by the Chair in February at the initiative of the Alliance of C12 UPV Chairs for the ecological transition and in collaboration with the Vice President for Sustainable Development of the Campuses of this university.

To end the Conference, José Luis Alapont, Director of the UPV Green Transition Area, presented the imminent call for projects from the UPV Living Lab.